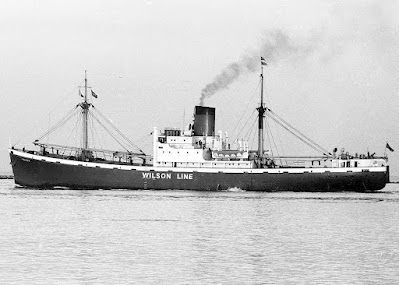 She was part of a large order for the shipyard of Henry Robb. nice mid sized cargo vessels with a passenger load of 12 all in very nice accommodations as the ships voyaged to Scandinavia or to the Mediterranean.

Look out for news on this release soon, so keep checking back.

Posted by Robbs Built Ships at 06:17 No comments:

Hi all I am very pleased to bring you news about the latest book, now available to pre-order from the publishers 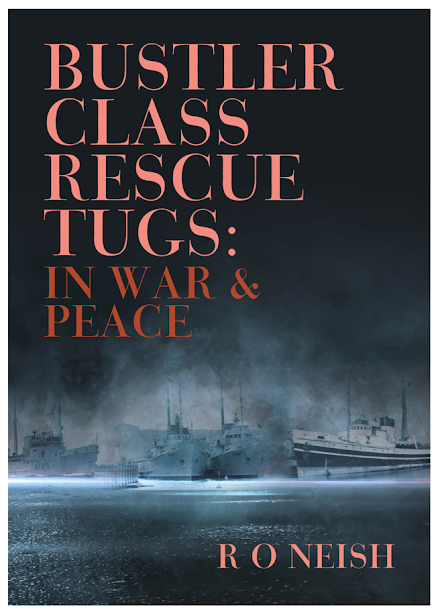 A brand-new book to help bring to attention the part played by the 8 Bustler Class Rescue Tugs built at the Henry Robb Shipyard during the 2nd World War. This book it is hoped will shed some more light on a part of this countries mariners almost forgotten. The men and women who were rescued under the most trying of times not to mention weather that would scare the gods, would I am sure give great cheers to the brave souls who formed part of the huge maritime effort both in war and peacetime.

This then is the story of the small force of much needed rescue tugs that were built in wartime conditions during the dark forbidding days of World War Two, when Great Britain had only the ships and men to bring in the raw materials required to fight on against the might of Nazi Germany and its Allies.

This is the compelling story of a small but very significant part of work done over many years by His and Her Majesty’s Rescue Tugs in defence of the realm, and to the benefit of seafarers all over the world. Ron Neish’s very detailed account of the contribution made by HMRT in general, and the Bustler Class in particular, is an excellent read, and has brought to life the immense impact that these rescue tugs have had over many years usually in dire circumstances, most especially during the Second World War. For instance, who would have thought of mentioning the rescue tugs in accounts of the many convoys that crossed the seas and were attacked by hostile forces.

This account is a fine example, helping to raise the profile of the magnificence of these small but immensely powerful and dedicated vessels, and of course their highly skilled crews without whom these heroic achievements would not have been possible.

- Whittles Publishing
Posted by Robbs Built Ships at 04:04 No comments: 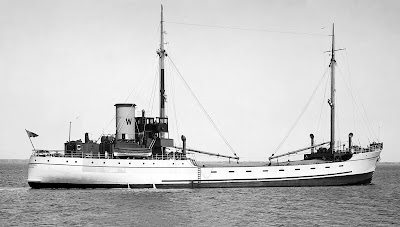 September 1936. You will find much more on the history of such fine ships in the book available from most good book stares.

“Volume 2 of “Leith-Built Ships - Leith Shipyards 1918-1939” is a notable follow-on to the author’s Volume 1, covering that port’s earlier shipbuilding years 1850 – 1918, and whose format closely matches that of its now award level predecessor.

Only a man with a lifetime of personal involvement within the industry at Leith and enjoying full access to all applicable records, can be fully qualified to pen such a detailed history of the yards within the nominated time frame, their founders, development, the ships and other vessels including the career details of many, matters of their operation and conditions, longevity, and demise whether at the hands of enemy, disaster or the breaker’s torch.

The trials and tribulations of shipbuilding of the era and covering by chapter the good times and the bad, war, depression and other key events are addressed, with descriptions duly spiced with comment and additional narrative containing fascinating accounts and the personal recollections of yard workers, ship’s crew and the like, often as submitted by family from personal diaries and other records of now departed forebears.

The book is peppered with black and white photo illustrations and other renderings of the ships themselves, ship and shipyard crews, and concludes with a completed listing of vessels constructed at Leith, and for clarity, glossaries of abbreviations, shipyard and maritime terminology.

This is an altogether first class, deeply researched and highly commended production, fully deserving of a place on the bookshelves of those with a keen interest in the maritime and industrial history of a bygone era. Regrettably Covid-19 restrictions have slowed the production and publishing of the third and fourth volumes to the Leith-Built Ships series. Their prospect, however, must surely be eagerly anticipated.”

Posted by Robbs Built Ships at 06:50 No comments:

Pleased to say that some nice reviews are still being received and appreciated for my books both non fiction and for my novels (more about them later).

Well Jules has this to say and I quote as follows-

I launched my naval career as a seagoing shipwright, so my interest in historical accounts of shipbuilding is not surprising. Scotland has a long proud history of this activity, most recently centred on the west, the Clyde in particular, but many people are unaware of the part played by the shipbuilders of Leith, in the east of Scotland. Leith had begun building ships some 400 years before the great shipyards of the Clyde and these vessels reached all corners of the globe. With a pedigree of shipbuilding second to none going back over 660 years of recorded history, the ships built at Leith deserve their place in history and this book, the second of a trilogy, continues the story focusing on the period 1918-1939. Among the fascinating tales is the launch then tragic loss of the largest sailing ship ever built in a British shipyard, the five-masted auxiliary barque Kobenhavn.

Posted by Robbs Built Ships at 09:38 No comments:

The following is a nice review of my latest book in the series on the shipbuilding heritage of the Port of Leith, Edinburgh, Scotland.

This is the second in a series of four books about the almost forgotten part played by Leith in Britain’s fine maritime past. I was pleased to be able to introduce Volume 1 They Once Were Shipbuilders to readers of Africa Ports & Ships at the end of 2019. Volume 2 provides the history of the ships built at Leith between the First and the Second World Wars including many well-known vessels destined for the home and overseas markets.

A few examples of these were: twin-screw hopper dredger for India, Bhavsinhji; the Danish-flagged five-masted barque sail training vessel København (sadly lost with all hands); Vyner Brooke built for the Straits Steamship Company with home port Singapore; the light vessel Albatross for the Commissioners of Irish Light, Dublin; another dredger for India, Rukamavati; dumb barges for the East Africa Lighterage Company and the tug Ulundi, now preserved at the Port Natal Maritime Museum, Durban.

Then there is Lafonia (renamed Fitzroy), a single-screw passenger / cargo vessel for the Falkland Islands Company and HMS Aldgate, a gate lifting vessel scuttled to prevent her falling into Japanese hands at Hong Kong on 19 December 1941 and the barquentine Mercator of 1931 later commissioned as a submarine depot ship in Freetown, Sierra Leone, and is currently preserved in Ostend.

South Steyne, launched by Robb’s in 1938, an icon of Sydney as a double-ended Manly ferry was preserved as a restaurant vessel in Darling Harbour. These introductions to Leith-built ships and their careers on the Seven Seas is extensive and demonstrates how important was the export trade in British-built tonnage between the wars.

To run down the Shipyard Build List Book of Henry Robb from 1918 to 1939 we see a huge selection over eleven pages from Ship No 1, a pontoon launched in 1918 to No 300, HMS Hickory launched in 1940. Orders for Nos 301 to 305, four motor coasters and a grab hopper dredger were cancelled.

Written by a proud shipbuilder who is still active in shipbuilding and well qualified to tell the story, the book features the shipyards of Cran & Somerville, Hawthorns & Co, Ltd and Ramage & Ferguson and the rise of the Henry Robb Shipyard into which they were incorporated. Each of the yards has some descriptive text with brief career details of some of the hulls sent down the ways

Liberally illustrated with photographs and ships’ plans Leith Built Ships, Volume 2 introduces some fine ships and tells of their careers and trading patterns.

Fortunes of the three main shipyards are followed through good times to eventual closure or assimilation by the man who would open up the shipyard that took his name, Henry Robb. As shipbuilders and engineers they began without a yard in which to build ships, but eventually took over firstly the old S&H Morton Shipyard, now occupied by Hawthorns & Co. Ltd. That gave Robb control of the Victoria Shipyard, and a few years later he would take over the Cran & Somerville yard, before acquiring the plant and goodwill of the Ramage & Ferguson Shipyard – the cream of the Leith yards.

It has been said that his last yard would always have a ship on one of its slipways. At the peak of business they had nine slips, and were pioneers in the building of diesel-powered coasters. Always innovative and with some of the best craftsmen in the industry, the shipyard of Henry Robb quickly acquired the reputation as builders of special ships.

Leith Shipyards 1918–1939 Volume 2: Leith Shipyards 1918-1939 continues the chronology begun in Volume I and provides a fascinating illustrated story that reveals the remarkable and ongoing tales of shipbuilding for which Scotland and the Great Britain were renowned.

Here are recounted the days when shipbuilding flourished and underwent the tough times of the Great Depression. Output of these yards remain a testimony to the skill and determination of the people who built these ships and to those who served in them.

In support there is a handy two-page set of abbreviations some of which are common to shipbuilding. To this is added a ten-page glossary of shipbuilding and nautical terms from Anchor to Warp by way of Deadrise and Pratique.

Mr Neish’s sources are many and include websites and Scottish newspapers as well as museums and State libraries in Australia and museums in New Zealand.

Whittles Publishing is a well-established publishing company based in the north of Scotland. The company is internationally renowned for producing high-quality academic and professional titles, as well as a wide range of excellent non-fiction books, many of which are now available as e-books. Topics include lighthouses and maritime topics.

Posted by Robbs Built Ships at 11:10 No comments:

My new Novel-Fight or Flight

For the Kindle version then please visit the following link- 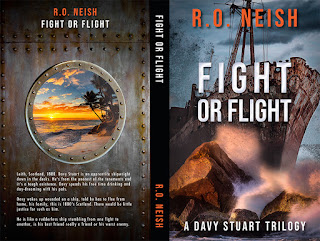 Posted by Robbs Built Ships at 10:28 No comments:

Very pleased to be able to tell you that the second volume in the series on the ships built at Leith, has now just been released from the printers and can now be said to have been published.

To all who have waited patiently after pre-ordering can I just extend my many thanks, the only reason for delay has been due to the pandemic but now the book will be arriving to the folks who ordered the rest of us can now purchase the book from the publishers at https://www.whittlespublishing.com/Leith-Built_Ships 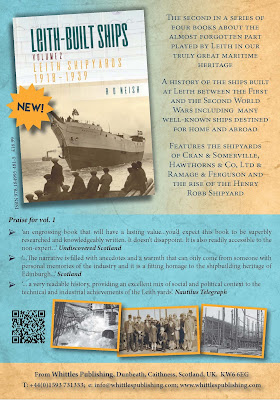 Posted by Robbs Built Ships at 11:20 No comments:

A must visit site-need i say more.

For reference, for history, for all things to do with , Ships and the Ancient Port of Leith.


A very informative site on the U.S.Navy

The Charity that saves lives at sea

Help to save the World's oldest Clipper Ship "City of Adelaide"

For a real good read on life in the Scottish Islands, and the ships around the Islands.

For what's happening in Leith today.

A fantastic site all about the "Classic Liners"

For ship movements in SETUBAL Portugal

For the latest of ships going to the "breakers Yard"

For the Professional Mariner
http://www.professionalmariner.com 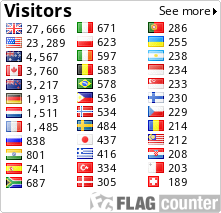